At the beginning of 2017, Holzindustrie Schweighofer implemented a state of the art action plan to fight illegal logging in Romania and to support a sustainable timber industry. Overall, the company invested €1 million in strengthening the security of its supply chain. A major pillar of this action plan is the company’s Timflow-system, a unique GPS-tracking system that monitors the transport routes of saw log trucks from loading point to saw mill gate. Overall, these measures by far exceed the requirements of the Romanian laws and regulations. One year after implementation, the company is now taking stock of its measures and wants to share this information with the public.

Transparency
Since 1 April 2017, Holzindustrie Schweighofer monitors all saw log trucks delivering wood to its mills via GPS. Since then, 800 trucks from 500 transport companies have been equipped with the system. Holzindustrie Schweighofer is the only company in Romania that makes the collected data publicly available: www.timflow.com. Up to now there were 5,200 user inquiries on the Timflow portal.

Holzindustrie Schweighofer maintains a zero tolerance policy regarding saw log deliveries from unclear sources and takes consequences in such cases. Following this principle, the company has so far delisted a total of around 100 suppliers, either temporarily or permanently, for reasons of non-compliance with Holzindustrie Schweighofer’s purchasing policy.

On 5 March 2018, the Romanian NGO Agent Green published a study about the performance of international wood processing companies operating in Romania. Holzindustrie Schweighofer was the only one of the 11 companies surveyed to have met all the assessed criteria. Agent Green’s study is published here.

Dialogue
Holzindustrie Schweighofer actively engages with its stakeholders. In an effort to maximize transparency, the company organized four public consultations involving 600 participants during the past year. In 2017 about 80 Romanian and international journalists visited the mills of Holzindustrie Schweighofer. In that connection 10 open days on which the local, central and international media where invited to the company’s mills were held.

Planting actions
Holzindustrie Schweighofer is engaged in the Tomorrow’s Forest planting project (padureademaine.ro/en). This is a multiannual project developed together with the Association of Forest Administrators (AFA) and the “Ștefan cel Mare” University of Suceava. The project’s goal is to plant around one million trees until 2024. Since the launch of the project it attracted around 300 volunteers. At the first planting in Poieni-Solca on 11 November 2017, 21,000 seedlings were planted on 4.7 ha. Six new planting actions are scheduled for this spring with 142,600 more seedlings to be planted on 34.9 ha.

Pilot project to investigate the feasibility of single log tracking
Holzindustrie Schweighofer is constantly working on improving its measures and procedures. Currently, the company is carrying out a pilot project for single log tracking whereby logs are identified using bar-coded tags. All relevant information about each log (dimension, species, quality, supplier data, origin, GPS data) is stored in a database and can be retrieved with a special scanning device or simply with a modern mobile phone. 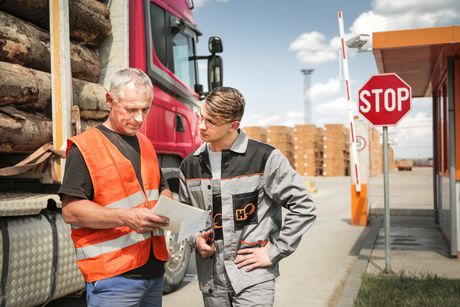