The Tomorrow’s Forest project rallied over 100 volunteers on 13 April, in a planting session which helped the reforestation of ten more hectares in Dumbravita, Brasov. Students at the Forestry Faculty in Brasov, members of the local community and authorities, volunteers from the Brasov area, forestry personnel, gendarmes and Holzindustrie Schweighofer employees at the Reci sawmill, helped plant 50,000 seedlings of sessile oak, ash and maple. The project was launched in September 2017 as a partnership between the Association of Forests Administrators, the Stefan cel Mare University in Suceava and Holzindustrie Schweighofer, in a move to help private owners and local administrations with the reforestation of degraded forest areas.

The planting area in Dumbravita was deforested in 1950-1960 in a move to expand pastures and was reintroduced in the forestry fund at the beginning of the 2000 decade. Between 2016 and 2017, the local administration has planted 16 hectares with sessile oak and ash. As part of the Tomorrow’s Forest project, we have planted ten hectares with sessile oak, ask and maple in 2018, and we continue with ten more hectares this year.

The Local Public Forest Administration Maierus RA manages this forest fund area and will oversee the planting activities, as well as the completion and maintenance works of the plantation, which are done by a specialised reforestation company, during the 2019-2024 timeframe.

Since the project was launched in the autumn of 2017, over 160,000 seedlings have been planted on a total area of 40 hectares. Until now, Tomorrow’s Forest has rallied over 1,000 volunteers in its actions carried out in eight counties nationwide. The project addresses private forest areas owners in Romania, who can register their property on www.padureademaine.ro 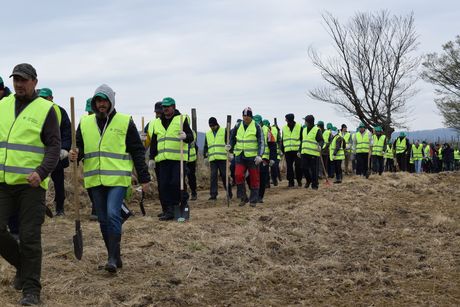 Tomorrow's Forest volunteers on their way to the planting site

Short video of the planting event in Dumbravita